What railfans today commonly describe as the "Dash 7" or "-7" line of General Electric diesel locomotives was announced late in 1976 and was described at that time by GE variously as the "1977 Series Locomotives" or else as the "New Series Locomotives."  This new line of domestic diesel-electric road locomotives was advertised in GE sales brochure GEA-10016, published 11/76 (1000 copies); the illustration above is from this brochure, and its cover is reproduced below. 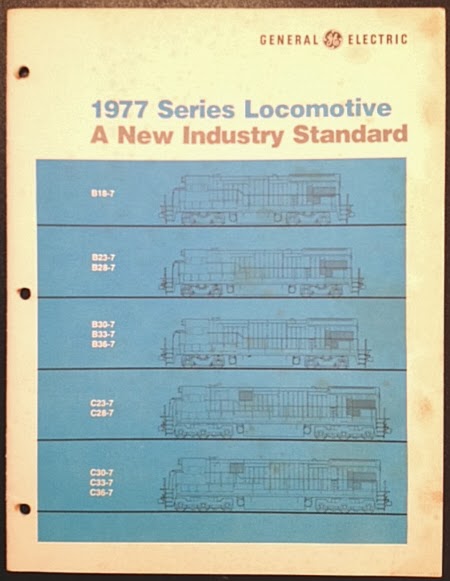 The line originally included eleven models, which can be seen on the cover of the sales brochure above; this is not uncommon knowledge.  What is uncommon knowledge is what the New Series actually introduced to the GE line, and what it did not; further unstated anywhere is the origin of the design evolution.
"A New Industry Standard."
General Electric states in the introduction to this brochure that the New Series Locomotive was "the result of an intensive three year design and manufacturing program to further improve the quality of General Electric Locomotives."  This process was of course continuous with GE locomotives already; over the years GE had included product improvements and refinements (as well as power uprates) into locomotives actually built in series production for railroad service, but at the same price as conventional units in the order (for example, GE included two 3300 HP U33B locomotives in the midst of a New York Central production run of 3000 HP U30B units as "pre-production field test units") for the purpose of field testing improvements.  This process had begun with the U25B and continued through the early 1970's; for example, the steel crown piston was introduced first in 1970 on high horsepower models and eventually was applied to all models at all ratings.  (In fact, the original cast iron piston was allowed to go out of production so that, by the time of a 1983 GE publication in the collection, the iron piston had been unavailable brand new "for several years.")  What was different, apparently, with this New Series Locomotive line was the concentration of overall effort from the front of the locomotive to the back in a short period of time.
The brochure tells us of two new periods of improvement. Phase One saw GE perform what is described as "an in-depth study" with its customers which resulted in the development of "over 60 product improvements" that were incorporated into the locomotives in 1975 "on a scheduled basis," which simply implies that improvements were phased in as they were ready.  Phase Two consisted of all of the alterations found in the New Series Locomotive lineup; it was considered also to be complete as of the 11/76 publication date of the sales brochure.
"Phase One"
General Electric issued Specification 3860 in 1975, entitled "1975 Product Improvements."  Brief details of this specification are included in GEA-10016 as is an illustration of the specification itself, seen below. 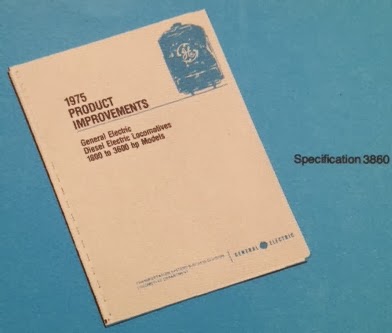 The list of improvements is wide ranging.  58 are listed in GEA-10016 from Specification 3860; these are listed below.  These are not explained but rather are simply listed; most are obvious, but for those which are not I will include a brief description from other official GE publications.

It should be noted that these improvements are not the XR-series changes, nor are they associated only with New Series Locomotives.  These were applied during the two years prior to the announcement of the New Series and were incorporated in U-series locomotives.

The second round of improvements included five major areas of alteration to design and fifteen further changes to the locomotives.  Some of the 15 further changes had previously been either field tested or offered as extra-cost options (for example, electric cab heat) but now these 15 were incorporated in all locomotives "at no extra charge."

The five major areas of improvement were the following:

1.  The air compressor was moved off of the pedestal supporting the radiator fan gear box, and into a new small compartment of its own separate from the radiator cab.

2.  The arrangement and orientation of the lube oil filter, lube oil cooler and engine water tank was altered and improved.

4.  High and low voltage components were separated into two different control compartments - one above the frame, behind the cab and one below.

5.  GE included its interpretation of the AAR Clean Locomotive Cab layout which itself incorporated 18 "significant modifications" to the locomotive cab

I will show a couple of illustrations that point up some of these alterations physically in the New Series Locomotives. 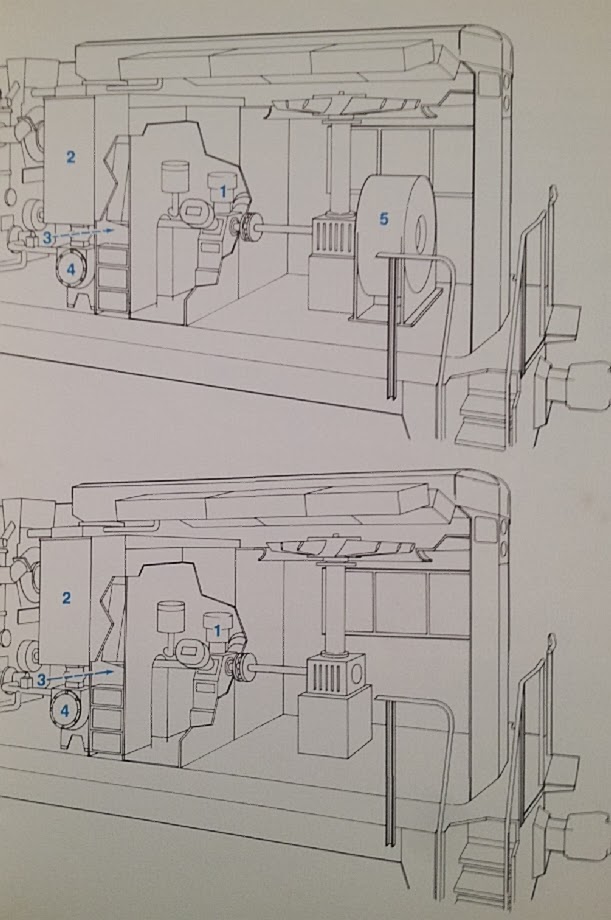 Above, we see the rear or "No. 2 end" of the New Series Locomotive.  A B-B or four axle unit is depicted at top, while a C-C or six axle unit is depicted below.  Immediately obvious is the fact that the air compressor is now in its own compartment, which "isolates the unit from road dust, eliminates oil and oil vapor from the radiator compartment, lessens the chance of winter freeze-up" and also ensures the air compressor a supply of "warm, clean air."  In addition to this change the water tank is redesigned, and no longer supports the oil cooler; the oil filter is reoriented to ensure drainage; the oil filters now have ten instead of eight to stretch changeout time, as well as other changes and improvements.  Note that the equipment blower is behind the radiator fan gear box on the B-B units; this was necessary to allow room for the entirely new layout behind the operators' cab, which we'll see next.  The six axle units had more than enough room to allow the changes without moving the blower. 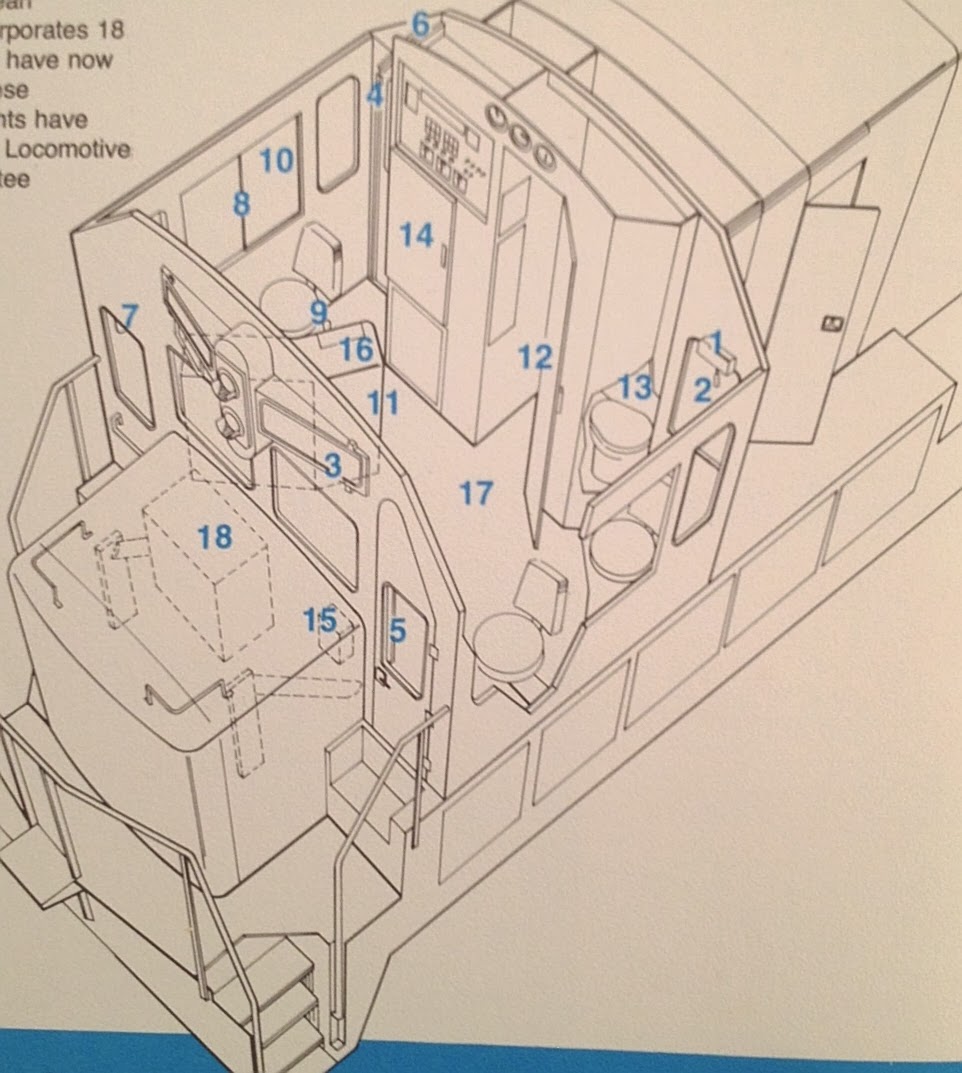 Above is the New Series Locomotive cab arrangement, incorporating AAR Clean Cab concepts.  The AAR locomotive controller (GE model KC-108) had been in use on GE U-series locomotives since 1972 and of course was incorporated in this design, but access to it and maintenance of it were improved.  The number keys on the illustration are for the following features:

In addition to the totally new arrangement (which moves the toilet to a new compartment behind the cab, and incidentally also incorporates electric cab heat as standard equipment on all locomotives - although side strip heaters were not standard) described here, low voltage and low heat electrical components were moved to a compartment above the running board and behind the cab.   This compartment was cooled by locomotive equipment air, but had its own secondary air filters as well.  This move offered greatly improved access and longer component life since all components in both lower and upper compartments were less crowded, as well as "adequate space for customer options."

Earlier I mentioned that there were five major changes to the New Series Locomotive and fifteen additional equipment modifications.  The additional 15 changes were as follows:

Most railfan websites have concerned themselves primarily with external features visible on this line of locomotives which distinguish them from earlier U-series locomotives - namely, the widening of the engine cab (or hood) toward the rear and the provision of identical radiator compartments on all units regardless of horsepower rating.

Above is the side view of the B23-7 locomotive from GE Specification 3530D, dated 2/77.  (The hood lines, and ground, should be level, but I'm unable to use a scanner on this somewhat delicate document and was forced to simply photograph it - thus, it wasn't perfectly flat.)  Notable are the wide radiator compartment at the top, or "wings," which on the U-series had appeared only on U33, U34 and U36 models.  Also apparent are the new arrangement of radiator compartment intakes as compared with late U-series units and the small rectangular radiator clean out access covers.  This specification for the B23-7 and GE Specification 3390G for the C30-7, dated 2/77 (and thus both very early for this line) both clearly indicate that dynamic braking was included as standard equipment on the units, with extended range dynamic braking being an option.  This is not listed as a change to the product line per se in any of the New Series Locomotive sales material, but seems significant to note from a sales standpoint.

Above is a side view of the B23-7 from GE Specification 3530E, which interestingly has no publication date anywhere but is the next after that depicted above.  (Again, same disclaimer about lines should be straight!)  This locomotive has been modified to incorporate an exhaust silencer stack and to remove the oval side cab windows - changes across the entire New Series in 1980.  Dynamic braking is still standard.  A number of other features have changed, particularly the traction motor gear ratios, but the locomotive is largely the same product.

•Railfans should be aware that massive changes to very complicated manufactured products such as diesel-electric locomotives are not undertaken lightly, and that in many cases what has been printed in railfan press over the years is not completely indicative of the actual progression of developmental advances in these machines.  Until now, most railfans would have been led to believe that the major changes in the "Dash 7" GE locomotives (a name that you will notice GE did not, and does not use referring to its own products in these publications) centered on the oil filter / oil cooler and some miscellaneous reliability / maintenance improvements.  My purpose in writing this article (and in reviving the long-dormant blog on which it's posted) is both to correct the written "history" of this line, and to try to get railfans to think more mechanically and be more curious about reality and history as it really did occur.

B23 Locomotive Specification 3530E  no date

The Davis brothers have had locomotive websites online in one form or another for over ten years. 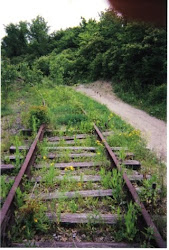